We believe in open science and open access to data, tools, and information. See below for public available resources

sharing what we have with the world

Tools for youths, data for researchers

We are committed to making publicly and freely available data, tools, and information in the spirit of open science and open access

our research in top scientific journals

Our research is published in high-impact peer-reviewed journals around the world ensuring the rigor of our methods. 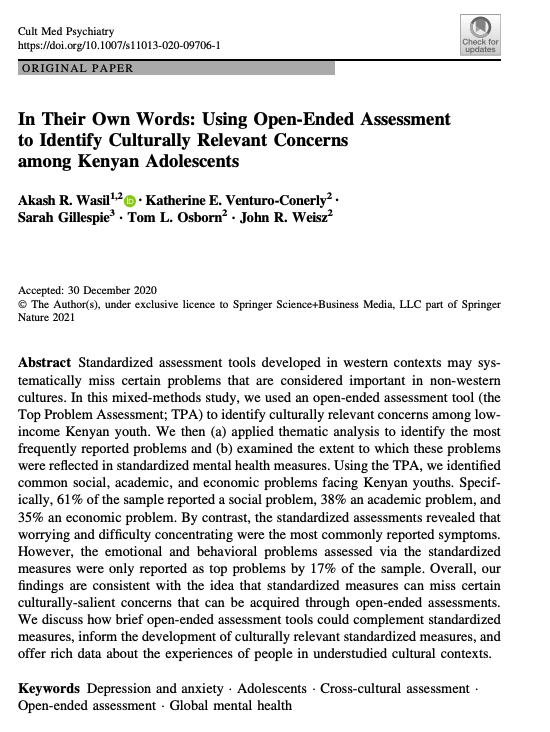 In Their Own Words: Using Open-Ended Assessment to Identify Culturally Relevant Concerns among Kenyan Adolescents
Culture, Medicine, and Psychiatry
https://doi.org/10.1007/s11013-020-09706-1

Standardized assessment tools developed in Western contexts may systematically miss certain problems that are prevalent and important in non-western cultures. Brief, low-cost, idiographic assessment tools may help identify these concerns, usefully complementing traditional measurements. In this study, we examined the utility of open-ended assessment as a method to identify culturally relevant concerns and to classify the most common problems experienced by low-income Kenyan youth. We administered the Top Problems Assessment and two standardized measures of depression and anxiety to 100 adolescents from Kibera, a resource poor urban settlement in Kenya. The Top Problems Assessment asked students to identify their three most important problems. We then a) applied thematic analysis to identify the most frequently reported types of problems and b) analyzed the depressive and anxiety symptoms most frequently endorsed on the standardized measures. 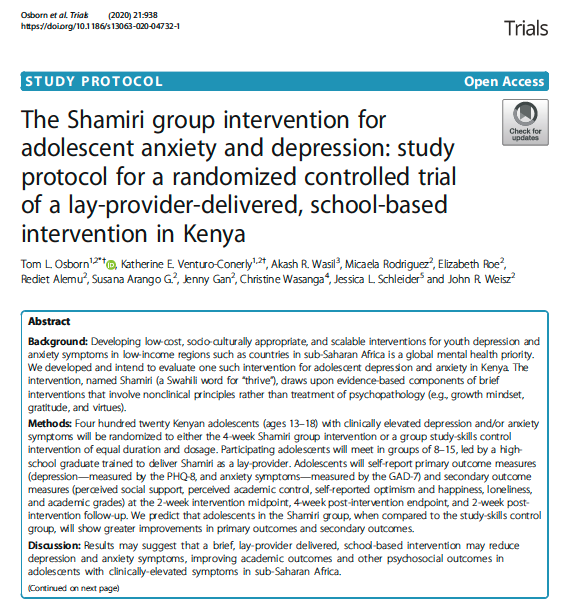 The Shamiri Group Intervention for Adolescent Anxiety and Depression: Study Protocol for a Randomized Controlled Trial of a Lay ProviderDelivered, School-Based Intervention in Kenya
Trials
https://doi.org/10.1186/s13063-020-04732-1

Developing low-cost, socio-culturally appropriate, and scalable interventions for youth depression and anxiety symptoms in low-income regions such as countries in sub-Saharan Africa is a global mental health priority. We developed and intend to evaluate one such intervention for adolescent depression and anxiety in Kenya. The intervention, named Shamiri (a Swahili word for “thrive”), draws upon evidence-based components of brief interventions that involve nonclinical principles rather than treatment of psychopathology (e.g., growth mindset, gratitude, and virtues). 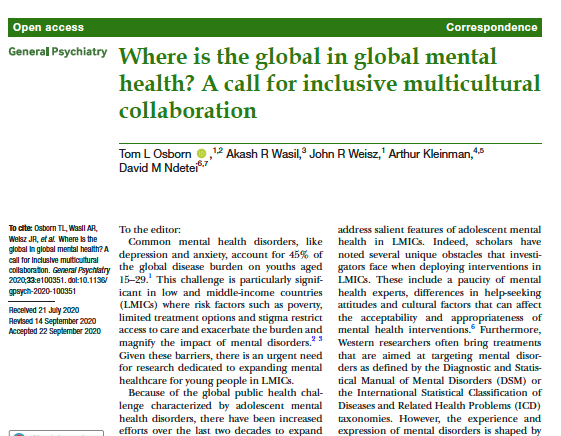 Where is the global in global mental health? A call for inclusive multicultural collaboration
General Psychiatry
http://dx.doi.org/10.1136/gpsych-2020-100351

Common mental health disorders, like depression and anxiety, account for 45% of the global disease burden on youths aged 15–29. This challenge is particularly significant in low and middle-income countries (LMICs) where risk factors such as poverty, limited treatment options and stigma restrict access to care and exacerbate the burden and magnify the impact of mental disorders. Given these barriers, there is an urgent need for research dedicated to expanding mental healthcare for young people in LMICs. 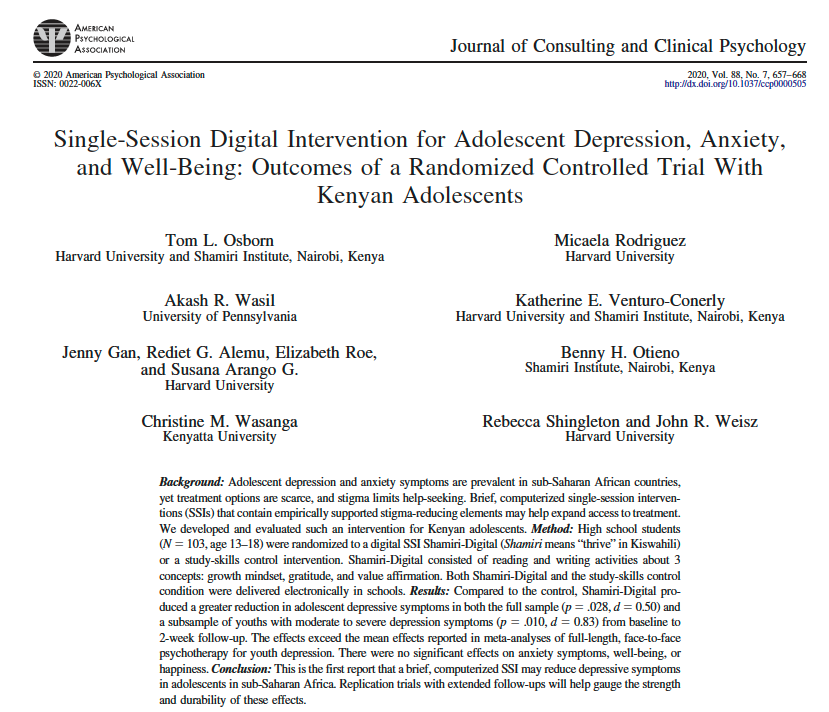 This paper reports the encouraging findings of our digital single-session intervention targeting adolescent depression and anxiety. High school students (N=103, age 13–18) were randomized to a digital SSI Shamiri-Digital (Shamiri means “thrive” in Kiswahili)or a study-skills control intervention. Compared to the control, Shamiri-Digital produced a greater reduction in adolescent depressive symptoms in both the full sample (p .028, d 0.50) and a subsample of youths with moderate to severe depression symptoms (p .010, d 0.83) from baseline to2-week follow-up. The effects exceed the mean effects reported in meta-analyses of full-length, face-to-face psychotherapy for youth depression 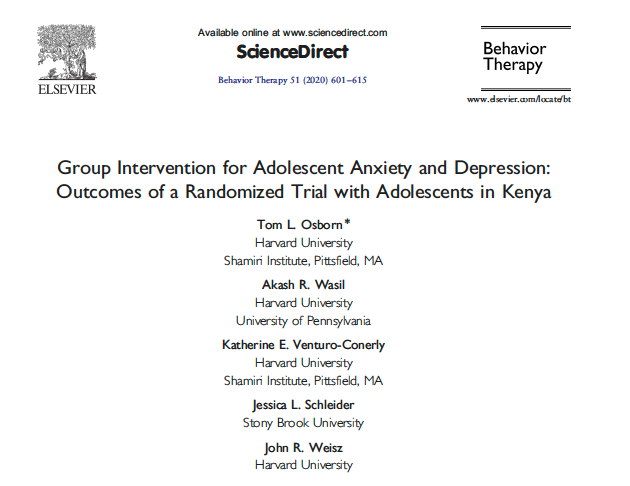 Group intervention for adolescent anxiety and depression: Outcomes of a randomized trial with adolescents in Kenya
Behavior Therapy
https://doi.org/10.1016/j.beth.2019.09.005

This paper reports the encouraging findings from our pilot trial of the group-based intervention with 51 high-symptom youths in an urban slum in Kenya. Compared to the control, our intervention produced greater reductions in adolescent depression symptoms (p=.038;d=.32) and anxiety symptoms (p=.039; d=.54) from baseline to 4-week follow-up, and greater improvements in academic performance (p=.034; d=.32) from the school term before versus after the intervention. There were no effects on overall social support or perceived control, but the Shamiri group showed larger increases in perceived social support from friends (p=.028, d=.71). 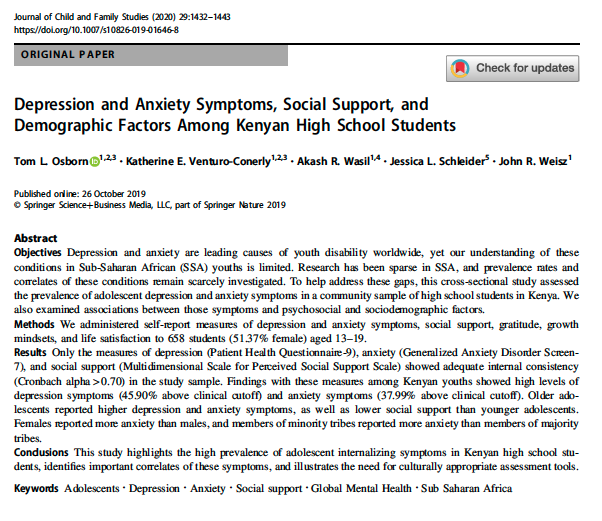 Our research informs our attempts to shape policy. See some of our white papers and policy briefs below 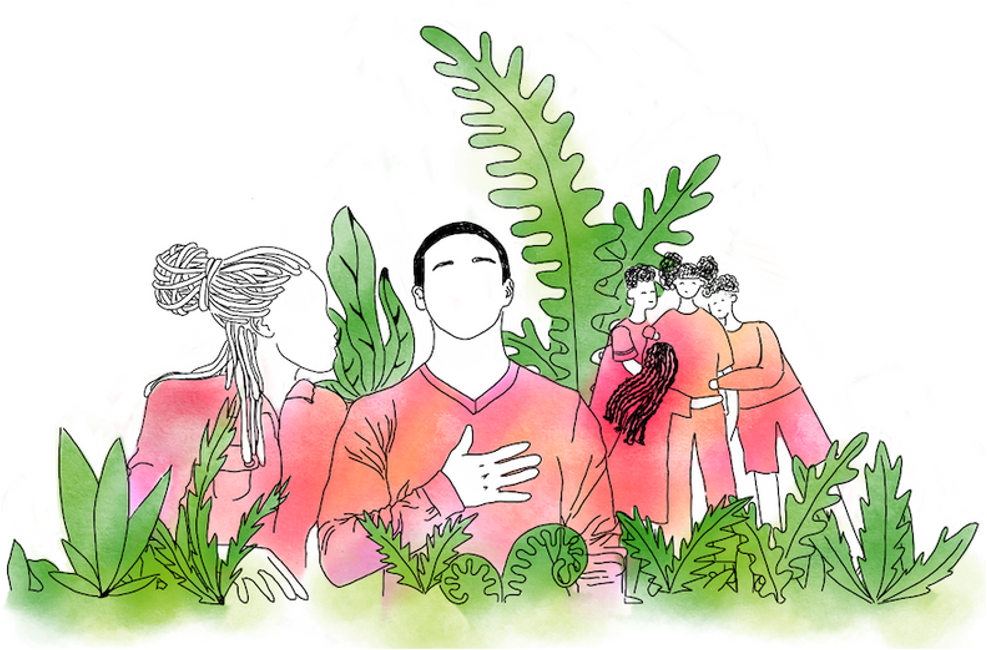 Read Paper
what we are currently working on

Training and Supervising Lay-providers in Low-income Settings: A Mixed-methods Study of Task-sharing from the Shamiri Randomized Controlled Trial

Adolescent depression and anxiety—which are linked with many negative life outcomes—are prevalent around the world, particularly in low-income countries such as those in Sub Saharan Africa (SSA). We used network analysis to examine the topology, stability, and centrality of depression and anxiety symptoms. We analyzed data from a large community sample (N = 2,192) of Kenyan adolescents aged13-18, using the Patient Health Questionnaire and the Generalized Anxiety Disorder Screener. We identified the central symptoms of the depression and anxiety symptom networks, and we compared the structure and connectivity of these networks between low-symptom and elevated-symptom sub-samples.Our findings indicate the most central depression symptoms were “self-blame” and “depressed mood”,while the strongest depression symptom associations were “self-blame” ––“depressed mood” and “trouble concentrating” ––“little interest/pleasure”. Similarly, the most central anxiety symptoms were “too much worry” and “uncontrollable worry”, while strongest anxiety symptom associations were “too much worry” ––“uncontrollable worry” and “trouble relaxing” ––“restlessness”.

Complementing Standard Western Measures of Depression with Locally Co-developed Instruments: A Cross-Cultural Study on the Experience of Depression Among the Luo in Kenya

Our present understanding of depression relies on a Western nosology that might not be generalizable across diverse cultures around the world. As a consequence, current clinical research and practice may not capture culturally salient features of depression. Expanded cross-cultural research that uses ethnographic methods and indigenous instruments may yield information of clinical utility to enhance culturally sensitive research and practice. In this mixed methods study, we used ethno-semantic interview procedures based on the DSM-5’s cultural formulation process to elicit a broad range of depression features reported by the Luo people of Western Kenya. We identified how the Luo conceptualize depression, including idioms of depressive distress, moods associated with persistent negative affect, and other features including context, stressors and support systems.

Stay in touch:
Sign up for our email list
About Us
Our TeamOur ModelOur Research
Project Thrive!
OverviewThe interventionThrive! Fellows
Join Our Team
Open PositionsBecome a Thrive! Fellow
News
Notable PressOur BlogMedia & Videos
Copyright © Shamiri Institute,
Shamiri Institute is registered organization in The Republic of Kenya (CLG-BXF6VR) and in the State of Massachusetts as a 501(c)3. EIN: 83-4556734